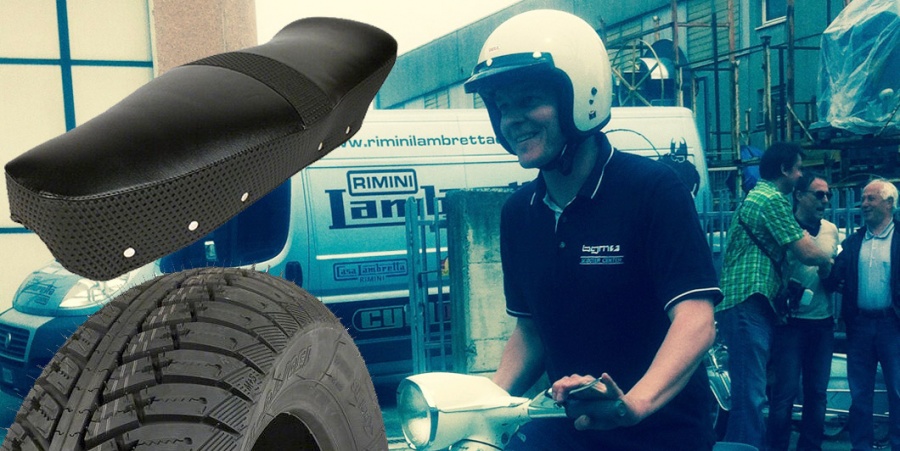 Individual gift ideas for scooterists by the Scooter Center team How long have you been working for Scooter Center:

What is your task at Scooter Center:

Basically anything connected to Lambretta. From purchasing to product development and support of our own brand BGM to sales and customer service.

What’s your relation to scooters:

From the moment I made my hobby my profession, scooters play a central role in my day. I currently ride a GT 200 for daily commuting. And I only ride Lambretta. My only Vespa never runs, maybe sporadically, in which case this great battery-powered ignition is on strike or there is fuel boiling in the carburetor. And then I am boiling with rage.

By now I ride scooters for 23 years and it all started with a PX 80 in weathered red… I bought my first Lambretta in 1994 at Scooter Center (then in Rosengarten, another street). It was a SX 200 with original paint, German documents and new MOT. The original paint was soon part of the past and so was the battery tray, which had to give way to the TS1.

There are many greatest experiences with and related to a scooter. This year’s highlight has definitely been riding the original 2 cylinder prototype at the Open Day at the Rimini Lambretta Centre. A great opportunity to give a seat cover away, which was installed in the 2 cylinder prototype with 12” by Innocenti. During one of our many visits of Vittorio Tessera at the museum we had the idea to produce such a seat cover. Either on our yearly trip to Novegro or while collecting parts at Casa Lambretta. The seat cover has a great look with Alfatex at the sides and is nicely lined to guarantee good comfort on long rides.

Seat cover for standard Lambretta seat frames. The sides and the top of the centre part are covered with Alfatex. The seat was handmade in Italy. Its inlay is made of foam. This guarantees high comfort on long trips.

One of the two two-cylinder prototypes by Innocenti has been equipped with a seat like this.

The idea of using Alfatex at the sides turned to be a standard with GP Electronics by Innocenti.

Supplied with additional metal clips and fastening material for a coherent design of the rivets. The seat strap 8040110 is a suitable alternative.

Another chance to give away (or buy for yourself) another part that was specificially made for the 2-cylinder prototypes. This time for the scooter that retained 10″ wheels. The toolbox that you are used from your Lambretta was abandoned, probably to make space for an oil tank to be used with an autolube system. This seems to be the reason for the neat toolbox that is fitted inside the legshield on this twin. From the side is as good as invisible and fits like a glove to the design of the Lambretta. Well, nothing else we would have expected from an Innocenti designed part. The mounting below is done to two of the horncast fixings and for the top fixing you need to drill a M5 hole to the legshield. Sdaly there is a limited production run of these only.

Lambretta Toolbox Set RLC
This toolbox is a superb copy of that designed and fitted to the Innocenti produced Twin Cylinder SX200 Prototype (as restored by the lads at Rimini Lambretta Centre and part of Vittorio Tessera s Lambretta Museum in Milan).

The toolbox is amazing in that when viewed side-on, it’s completely invisible and is VERY sleek in appearance. The lower mounting bolts fit the bottom horncasting retaining bolts. At the top, you will need to drill a small 5mm hole for the single, top mounting bolt. This will be totally invisible though once the toolbox has been mounted. The toolbox is made of fibreglass, comes complete with a grey outer rubber beading and lock (+ 2 keys).

It fits any Lambretta Series 3 LI, SX. TV, GT, Special or Serveta model. Please note that these toolboxes are a LIMITED EDITION item and are served on a ‘first come, first served’ basis. Tool to adjust a Lambretta ignition: Beluga by CMD 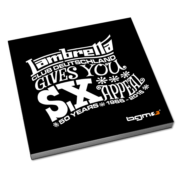 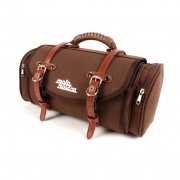 An alternative to the top box - classic roll bag for Vespa

Deutsch
We, Scooter Center GmbH (Registered business address: Germany), process personal data for the operation of this website only to the extent technically necessary. All details in our privacy policy.

Deutsch
We, Scooter Center GmbH (Registered business address: Germany), process personal data for the operation of this website only to the extent technically necessary. All details in our privacy policy.
Loading details
Back
Ok
Ok